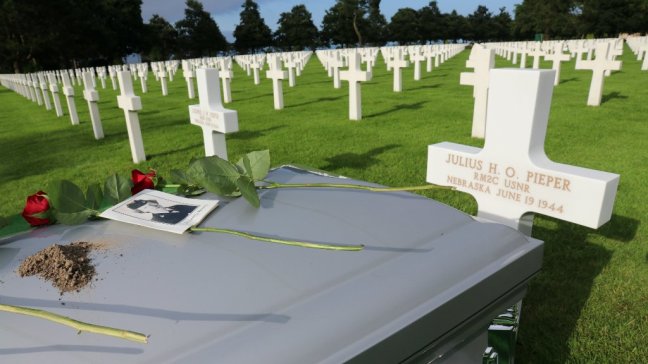 With the news media hungry and seemingly seeking out “bad news” stories regarding our Navy, thought I’d take a minute to share a “Good News” story from your Naval Forces Europe/Naval Forces Africa/U.S. SIXTH Fleet AOR.

For decades, he was known only as Unknown X-9352 at a World War II American cemetery in Belgium where he was interred.

On June 19, 1944, Radioman 2nd Class Julius “Henry” Pieper and his twin brother Radioman 2nd Class Ludwig Julius Wilhelm “Louie” Pieper were members of Landing Ship Tank Number 523 (LST-523), off the coast of Normandy, France.  Only 13 days after the June 6, D-Day landings, LST-523’s mission was to deliver supplies at the Normandy beachhead and remove the wounded. It never got there.  The ship struck an underwater mine, exploded, and sank as it tried to approach Utah Beach, of the 145 Navy crew members, 117 perished.

While Louie’s body was soon found, identified and laid to rest, his twin brother Henry’s remains were not immediately recovered and following the establishment of permanent overseas U.S. cemeteries, Henry was memorialized on the Tablets of the Missing, also at Normandy American Cemetery.  Henry’s remains were recovered in 1961 by French salvage divers and, due to the unrelenting resolve of the Defense POW/MIA Accounting Agency (DPAA) to account for Americans who went missing while serving our country, Henry’s remains were identified in 2017.

On Tuesday 19 June 2018, 74 years to the day after trying to reach the blood-soaked D-Day beaches, Radioman 2nd Class Julius “Henry” Pieper, at the request of his family, was laid to rest beside his twin brother in Normandy. A lone bugler played taps as the casket was lowered in an end-of-day military ceremony attended by a half-dozen family members, closing a circle of loss. Each laid a red rose on the casket and two scattered American soil over it.

The professionals of Navy Region Europe, Africa, Southwest Asia, with tremendous support from the Naval Forces Europe Band, Naval Hospital Naples, US Marines, and the US Embassy Paris, led the efforts to ensure our shipmate, who made the ultimate sacrifice, received the professional and dignified burial ceremony he so earnestly deserved.

In reading the background on the twin brothers, their service and sacrifice, and the efforts our country has taken to identify the missing brother, I know we are all proud to wear the cloth of our Nation in defense of freedom!

Thank you for all each of you do every day in service to our great Nation!

This short video (2 minutes) capturing the event located at: